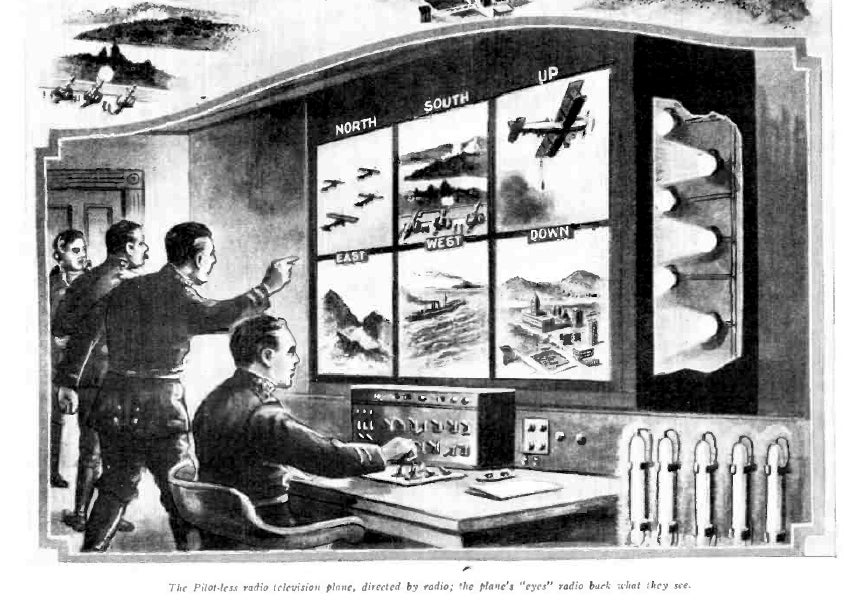 Drone warfare is a rather recent development and is a core element of military operations. But it has been a dream of the military for almost a hundred years now, perfectly illustrated in this drawing from 1924. The inscription on the image says:

The Pilot-less radio television plane, directed by radio; the plane’s “eyes” radio bark what they see.

Seven years after the publication of this image, the March-April 1931 issue of Television News magazine wrote:

The airplane is started from the ground and is sent over the enemy territory. During every second of its flight the control operator, although 50, 100 or possibly 500 miles away, will see exactly what goes on around the plane, just the same as if he himself were seated in the cockpit; with the further advantage that, sitting before a screen, he can scan six directions all at once, which no human aviator can do. If, for instance, an enemy airplane suddenly comes out of a cloud and starts dropping bombs on our machine below, the control operator sees this enemy machine quicker 500 miles away, than if an aviator sat in the cockpit one-quarter of a mile away from or below the enemy bomber. The control operator will send a radio signal that will immediately discharge a smoke screen from his radio television plane, hiding his craft in smoke.

Today’s drone warfare is typically conducted many thousands of miles away. Read more at Paleofuture.

Published on February 27, 2014
Tweet
From: History
← Before “Her”, There Was Kitt
Swedish Subway Digital Poster Ad Reacts To Arriving Trains →